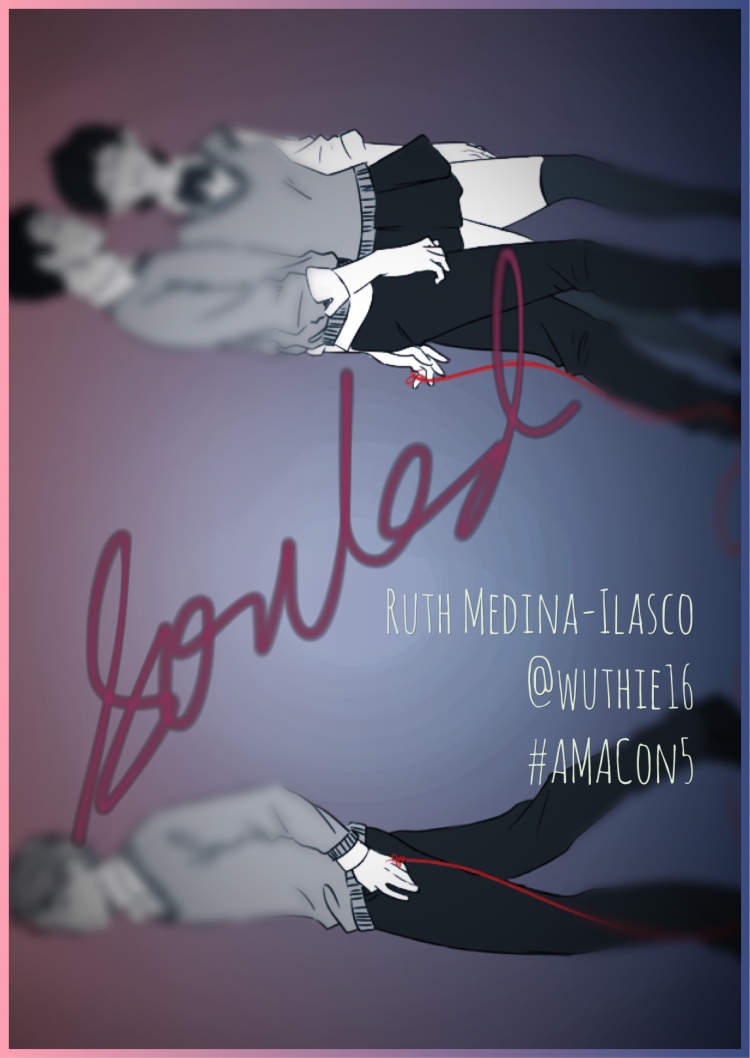 He enters the restaurant with his office mates and bosses after their company’s board meeting ended early. It’s bound to be a light night out, that perhaps will end in a few drinks a little later after dinner. He’s in a pretty good mood, what with it being almost weekend and all.

Walking inside the restaurant they had reservations in, he’s laughing at one of the jokes that his director is telling him when he suddenly stops in his tracks. He doesn’t understand it but his heart suddenly starts to pound.

What’s going on? He wonders and places a hand against his heart, frowning as he looks down. This is unusual. He thinks as he feels his heart threatening to jump out of his chest. He feels anxious and he doesn’t know the reason why. I need to calm down.

Then he feels a tingle go down his spine as goosebumps erupt along his arms. He suddenly looks up, eyes wide and still full of wonder, his gaze zeroing in on… something—no, rather… a someone.

And his breathing hitches.

Oh god… He thinks as he tries to stifle the gasp that’s about to come out of his lips, his heart clenching so painfully hard that he starts to breathe shallowly.

“Hey, are you ok?” One of the big bosses asks him, patting his shoulder in concern when they notice him simply standing by the entrance of the restaurant they are all finally in. He looks so pale that it seems like he’s seen a ghost.

He hasn’t seen her face yet, however. But he knows that it is her, for some reason. The heart never lies. The call of the soul never lies either. And this time, his heart is screaming at him that it’s her.

Sitting on a table, laughing with a man, as she cuts the meat on the little boy’s plate beside her before slightly scolding the little girl sitting in front of her, who uncannily looks a lot like her, a gold diamond ring circling her left ring finger.

And realization sets in.

It suddenly hurts. It hurts so bad that it becomes harder for him to breathe. He starts to hyperventilate. He wants to get out of that place, wants to run away. But his feet won’t let him. His feet stay leaden. He’s rooted to the spot and he cannot seem to take his eyes off as he watched her smile lovingly up at the man seated on her other side, placing a hand against the man’s cheek, her thumb caressing his stubbly face.

He must have gasped out loud. Because she suddenly looks up and looks his way.

And now he sees her face; her beautiful, radiant face that would now haunt not only his dreams but his waking hours as well.

And suddenly, he knows.

But she can’t do anything about it.

Not when she isn’t free anymore.

Gathering the strength of 10,000 men, he turns on his heels and walks briskly out of the restaurant, ignoring the call of his mates and bosses within.

He needs to get out now. He’s about to break and he needs to be alone before he does so. He needs to be by himself. He needs to be where he could cry and scream and curse and be mad at the whole world for this fucked-up situation he suddenly found himself in.

So why now? Of all times, why now? When he cannot do anything about it when she isn’t readily available anymore.

His walk turns into a run as he made a dash outside the restaurant. He doesn’t see the lone tear that fell from her eye the moment he turned his back on her.

She wipes the lone tear that fell unknowingly on her cheek then smiles a little, albeit a little shakily.

“I’m fine,” she tells him. “The aircon is right in front of us. Something must have gotten into my eye.”

“Ok,” her husband answers uneasily. But accepted what she told him without question. Because since when has she lied to him about anything? Never, of course.

Because she knows that man. That man that just walked out—no, ran out of the restaurant in brisk strides. She knows him. And she never thought that she’ll ever see him in this lifetime.

She’s been dreaming about him too, for the past year. And though she dreamt of him without knowing his face, one glance at him and her heart screamed at her.

Though she is happily married with beautiful children, she has always felt that she’s incomplete. That there is this hole in her heart that needs to be filled that somehow, her husband and children cannot wholly fill. She’s happy, oh yes, she is – don’t get that wrong. She’s content with her current life.

But she isn’t truly happy.

Because her soul is yearning out for another. Her soul is crying out for another. Her feeling of incompleteness is because she is also yearning for him, for that man she just saw. That one man that will give meaning to her life. That will provide full and true happiness and contentment. That will be the other half that will fill the void within her soul.

Just that one look, that one glance as their eyes met even for a brief second – she already knew that he also needed her.

And that changes everything.

“I need the ladies room,” she announces softly as she wipes her mouth on a napkin.

“Go ahead. I’ll feed the kids while you’re gone for a bit,” her husband tells her with a soft, loving smile. “Hurry back.”

Standing up wordlessly, she proceeds to walk to the restrooms where she locks herself in one of the cubicles within.

But she cannot. She cannot hold it in anymore.